So you bought a squier strat/tele.

What are the most common mods you see people do and where do I source good parts in Europe?
I am guessing trem and pickups, no?
What about pickguards? One size fits all?
I know GuitarFetish has those short block trem replacements but the wait is long and the customs is killing me

Τhe most needed mods for low budget guitars is a new nut and tuners....after that is done then you can literally go nuts with mods especially if you can do the work yourself....i would then block the bridge and get new electronics for it and stop there.... of course i have a squier where i installed new stainless steel frets,i scalloped the board,i changed the inlays,the pickguard pretty much everything except the body and the neck but most of those mods are overkill...

Unless you do the mods yourself dont go beyond the holy..trinity...nut,tuners,blocked bridge and maybe a pickup swap at some point.As for the customs i know exactly what you mean....options are limited in the european union.

What are the most common mods you see people do and where do I source good parts in Europe?
I am guessing trem and pickups, no?
What about pickguards? One size fits all?
I know GuitarFetish has those short block trem replacements but the wait is long and the customs is killing me
Click to expand...

I personally don’t mod any good playing guitar if it’s not necessary- polishing frets, setting it up? Yeah of course, but anything else is up to you…

I use AxesRUs in Hull, Axecaster in Essex for parts for repairs.

If its not setup good then have that done.

I have an 2000's danoblaster Danelectro. Best neck Ive ever laid my hands on. Made of somekind of particle board. Very light. I put in Lace Sensor Golds in it and the only thing I would change is the saddles.Altho the zinc ones do sound kinda mellow. It is a cheap guitar but whenever I compare it to a guitar worth x times as much I just cannot justify the price difference. So I am thinking maybe this is the route to go. I mean the last guitar that impressed me, but really really impressed me was a Gibson LP CS 56 worth 5600eur. I mean I cannot justify paying that much money even if i had it. Everything else feels kinda the same. I mean wood is wood . Either it resonates or it don't. No?
Yesterday I found an 2004 Squier strat and it also has a great feeling neck. Something I rarely find in today's mid to high priced fenders. It needs a new pickguard as far as I can tell.

I would upgrade the pickups, the nut and the bridge. I would only replace the tuners if it doesn't stay in tune.

A good proper setup and as stated before polish the frets file and dress the fret ends if it develops some fret sprout and adjust the pickup heights to give the sound you are looking for. Make sure the nut is not binding, especially if you are trem user then play it for a month. If there is something that you don't like after that time frame, then change that part. Your mods to your guitar should be for you and you only. The stuff I like on my guitar rarely fits someone else's style...whether it be aesthetic or playing.

In my case if I’m switching out the pick-ups I switch out the pick-guard, pots and switch with the new pups.
I write on the inside of the original pickguard the guitar model and serial..put in a large freezer bag and store it. If I sell it, it can go with as back to original.
Yes, I know this is not a super expensive guitar…but we said the same thing about 60’s low end Japanese guitars a decade ago and they are now through the roof in some cases…

It depends a lot on the model. Classic Vibes, Contemporary and Paranormal series typically don't need anything more than a good setup. Most Affinity and Bullet models benefit from a bit of fret smoothing and nut work along with the setup.

On the tuners, the ones on the Affinity and higher are good, no need to change them. The trapezoid ones on the Bullet aren't that great but are functional.

On pickups, this is up to individual taste. Someone who wants a hard rock or metal sound will want something different from someone else who wants blues or country. Sometimes simply changing pickup height can produce the desired results.

On electronics, most Squier Strats come stock with 500k pots. This can make them a bit bright. Swapping in 250k pots and different cap values can get you different tones. If you're swapping out electronics anyway, you might as well swap in an upgraded switch and jack too.

On the bridge assembly, I don't see any need to swap it unless you're a heavy trem user. Otherwise, just deck it and you'll be fine.

The list of typical player mods you're already seeing. That is because 'the Internet tells them so'. They do get into troubles (I've bought used Squiers cheap because some owner listened to the internet that the nut was 'plastic junk' and they poorly installed a replacement).

The mods I do on Squiers:
-Setup
-Check the fretwork and level/crown/polish if issues (the Indonesian-made models they have now rarely need this) plus nut slots.
-Adjust pickups low (ceramic magnets are hotter than alnico so they need to be further from the strings for the same tones, don't use alnico 'specs' to set heights, use your ears).
-Check string Ts and saddles/bridge plate for any burrs that can catch the strings. File smooth if necessary.
-Graphite 'lock lube' the nut and string contact points.

I've seen where graphite nuts indent from the wrapped wire on strings so they 'ratchet' when moving in the nut slots. Those nuts are much too soft. But people replace with branded nuts anyway because of Marketing.

Tuners only need to be replaced if you are a sloppy guitar tuner and try to hit the note on the way down where you leave slack in the system. Only 'tune up' your guitar, if you overshoot then drop back a half step and 'tune up' to pitch, and even the old trapezoid tuners from the 90s work. Most Squiers today have sealed tuners that work just fine. Tuning issues are due to operator error first and friction issues second. Some like to 'change strings fast!' and go with locking tuners, but if you wrap the post first and thread the hole second you are within a few turns to pitch too.

Block/trem does not need to be replaced. It does not change sustain or tone. Those who believe there is such an issue, again because of the Internet, test as-is then replace the bridge along with new strings ... where the new tone comes from the new strings. You can also 'block' the trem like Eric Clapton approves.

If I find 'a tone problem' that is not fixed with pickup height adjustments (look up old Hendrix videos and he adjusted his pickups all around plus tipping them for more/less bass/treble and he even had the 'proper vintage alnico' pickups in his guitars), then I measure and swap the pots and caps. They push the tone around even when 'dimed'.

For more durability and better feel I replace the small Alpha pots with Bourns (I like them better than CTS), a CRL 5-way switch (you'll need to bend up the bottom tabs to fit in thinner body Squiers), and a Switchcraft jack. Same parts that go in MIA Fenders.

For lower noise I will replace the two wires to the jack with shielded cable. Twisting the pair of wires does nothing, use the same shielding concepts you do in the cable from the guitar to the amp. Cavity shielding with Nashua Aluminum Flashing tape works for the rest of the cavity but start with shielded cable.

While swapping the control parts I will rewire the guitar with an Armstrong Blender mod (SSS pickups blend to series HSH or anywhere between). I find that much more 'versatile!' than getting an HSS or even an HSH Strat -- I keep all the classic SSS Strat tones and then have a stealth Les Paul/Super Strat too.

I put in a new vintage Fender Bridge $22.00(simply because it was suggested on a thread similar to this) Set it up and it plays wonderfully. I can play it all day long.

I do have high end guitars, so it's not just about economics. I just wanted to see what the inexpensive guitar enthusiasm was all about.

Get the best action you can like everyone here suggests. For me it's the lowest string height with NO buzzing. Not a mod but recommend you strive to know your fretboard, cold.

Depends on your needs. For me it was massaging the fretends - rolled the board), Tusq nut(properly cut) and locking tuners....oh and some knock off rails...If your not into heavy trem use than the locking tuners arent necessary. 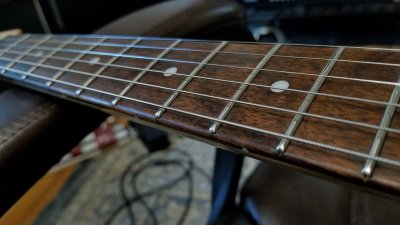