IMO that doesn't look like it's up to the usual CS standard of work. Clearcoating over the wear is just stupid.

gratefulphishfan said:
thanks hehe. Yes I did and am waiting for their decision. Just wanted to see if the community felt it was a reasonable question.
Click to expand...

yeah - absolutely it is. That doesn't look good at all, to me. YMMV.

Are you sure it’s laquer over the wear? If the wear is from something soft like a shirt (in the case of real wear) or an arm, it’ll often be shiny because the material or even human skin basically buffs the surface to a high polish. HOWEVER, I do agree with you that it looks unauthentic to have that kind of wear in that area. If I saw that for sale online I’d probably assume it was a home job.

gratefulphishfan said:
All fair points. But for those of us who like relic guitars, if you pay money for a relic you want it to look real. Otherwise what's the point? A massive part of the Custom Shop message is guitars that look like they are truly [50] years old. Look like a piece of history. I would love a real '63 Strat, but I could never afford that and I like the look of a beat up old Strat. I don't want to trick anyone into thinking it is a real relic, but I'd like it to look good. The question is about others' experience with CS relics. The ones I have seen look very authentic - all except the one I paid for sadly.

I would say the images you shared do look authentic. Would you agree there is a difference between good looking relic work, call it "art", and just an out of the box "road worn" look like a cheap piece of furniture or something like that.
Click to expand...

I think you just have to know what you're in for when a person purchases any distressed guitar...because the wear is simulated. Also, what is authentic wear when speaking of distressed guitars? I've seen and played vintage Strats that looked worse than simulated relic guitars. You'd be surprised at how "unnatural" looking some vintage guitars appear. I like relic guitars, but I like them for the worn-in feel, not for the aesthetic. This may be where we disagree. I'm the type of person who doesn't look at guitars as art. There's definitely an art involved at relicing guitars, but subjectivity comes into play when it comes to art. I look at them as tools. A means to en end. I've had somewhere between 6-8 relic guitars. Some wear patterns looked out of the place. But this is the nature of simulated wear.

I don't think there is lacquer over the wear. Of the plethora of relics I've owned and played, none had lacquer over wear spots. Do you think Fender, or any guitar mfg., is going to invest the time, effort and money in lacquering a body, relic-ing it, and then lacquering it again? That's simply not conducive to saving time and money.

You have an inauthentic simulated wear spot...

That might not be clear coat on the bare wood but Fullerplast or sanding sealer.

CandyAppleHead said:
That might not be clear coat on the bare wood but Fullerplast or sanding sealer.
Click to expand...

My thinking as well.

Perhaps reach out to your dealer as they sell/order many Fender Custom Shop guitars and you only ordered one...consequently, your dealer probably has more pull to get a response from CS than you do by yourself.

Hmm...you want the fake wear and tear to look like it's........authentic? Interesting.


However, I do see your point about it being glossy.

To each his own.

replace the body with an MJT, they do the relic jobs correctly.

Back when Vince Cunetto did the work it had a different feel altogether. Fender took it over sometime after 1997. This is a Cunetto Relic. You would be hard pressed to distinguish it from a real 62. 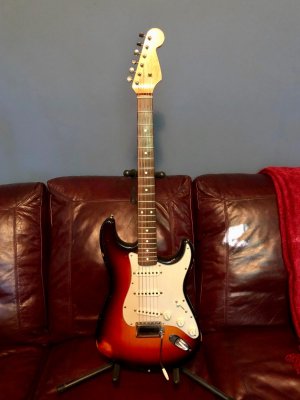 I’m not enthusiastic about what appears to be a white outline around the outside. But they were showing that look with several relics I saw advertised new a few months ago. They are hard to buy sight unseen...if you aren’t happy contact them... Journeyman is safer in that regard.

In general I think that the FCS has become lazy and complacent with their ageing and relic’ing process, especially on the Team Built instruments, although I’m not excusing some of the ‘master builders’ from their handy work either.

This fretboard wear is a good......I mean bad example: 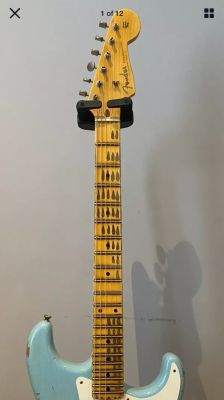 The ageing on the body looks reasonably okay......but THAT neck! 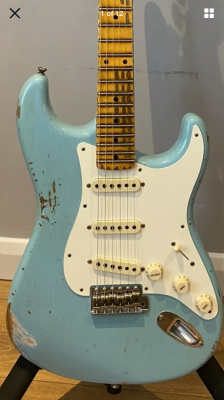 You’d think by now that they would have it down to a fine art but so many of them just look terrible.

If it feels ,sounds, and plays good probably a rock solid strat.

I have 59 heavy relic that I feel looks pretty realistic - especially after the road worns and rory gallagher guitar's I've owned. 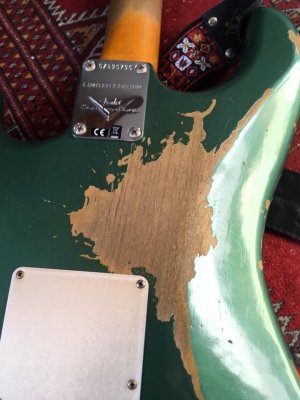 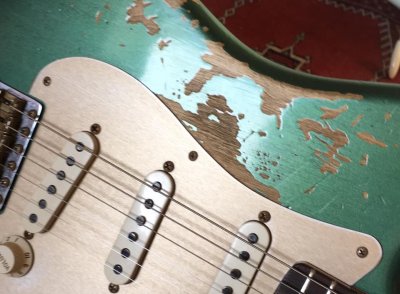 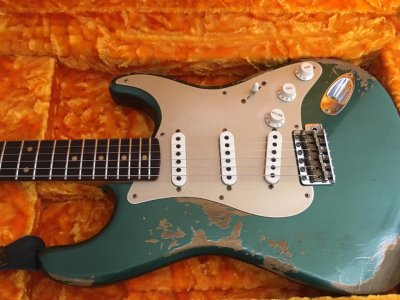 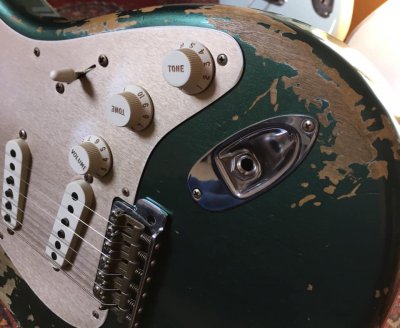 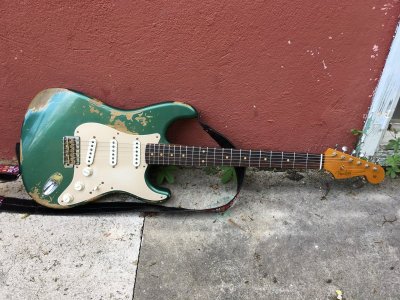 =KARMA= said:
In general I think that the FCS has become lazy and complacent with their ageing and relic’ing process, especially on the Team Built instruments, although I’m not excusing some of the ‘master builders’ from their handy work.

This fretboard wear is a good......I mean bad example:

The ageing on the body looks reasonably okay......but THAT neck!

You’d think by now that they would have it down to a fine art but so many of them just look terrible.

gratefulphishfan said:
Hi everyone - I recently ordered a '63 Strat relic right from the Custom Shop. When it arrived, after almost a year, I was disappointed to see the quality of the relic work. I attached an image for reference. Does anyone here have experience with Custom Shop relic guitars? To me this does not look like authentic wear from a 1963 guitar. It looks like a "road worn" series or something of lower quality - and cost! My expectations for a CS relic was that it would look much more authentic. Any thoughts would be greatly appreciated.

Can't get the other pics you posted to show as they have red Xs over the thumbnails, but this pic of the wear on the lower (treble side) cutaway looks like the wear on many of the preCBS Strats I dealt with back in the 70s and 80s when I worked in guitar shops. Many of these were working axes and would travel for miles in their cases stashed behind the car seat as the musicians drove from town to town and gig to gig. The vibration of the car would make the guitars rub against the inside edge of the case, wearing off the lacquer there and on the edge of the bottom bout. If you ever look at the old cases you can also see that the orange plush lining is worn away sometimes down to the wood. The white portion of the paint looks like possible undercoat as white and/or desert sand were often found under the top color.
Anyway...my 2 cents worth...from an old boomer who's had and seen hundreds of these babies.

well here was the one I had, I thought it looked relatively realistic but who knows. 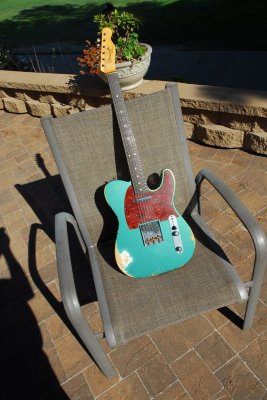 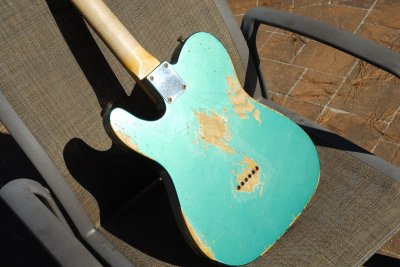 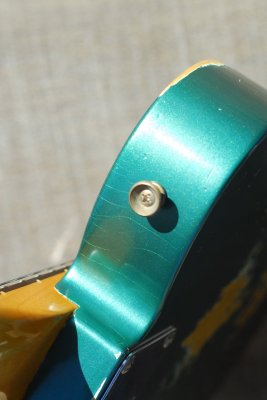 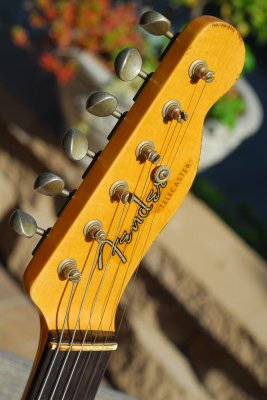 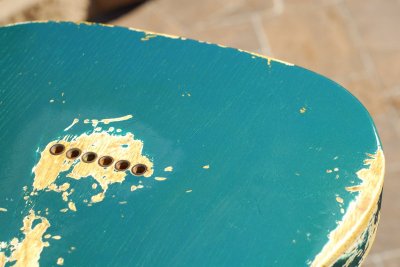 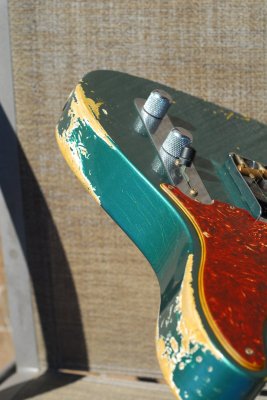 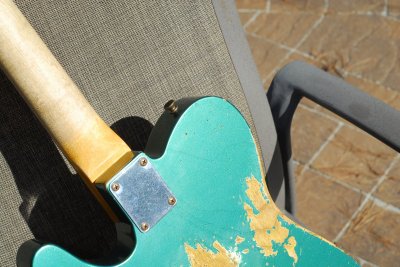 If I can look at a relic job and think It could do that’ it’s likely to be a bad job. I looked at the OP’s pic and guess what I thought......?

Im ordering a Fender CS in november. I love the look of relics, but from what Ive seen in person and on line, the ware is just to inconsistent to order one site unseen.

So, Im going for journeyman. It seems to be a finish that is consistent, hard to do wrong and one theyre good at.

Also, its seems a tough one for fender. Wasnt long ago they were accused of stenciling their relic ware. It was probably something they put in place to get a more consistent quality, but they were called out for it. Which is strange, because ware tends to develop on simular spots on guitars.