And everyone breath. OP posted a question and was satisfied with the information given that they should walk away. Job done. No need for anyone to take offence and everyone is entitled to their own view. I have been ‘sold’ one very convincing CS fake. Looked fine in most details. Had a COA. Matched the serial number. But on closer inspection it was fake and I returned it. Quite a lot of hassle that the OP has potentially been saved by the good and generous responses here. End of?

Mr Dunlop said:
I have been buying used guitars for many years and have not been fooled yet.

If a guitar is questionable I always go to the dark side until proven otherwise.

A guitar with no serial is a HUGE red flag. Even if its authentic its most likely stolen and would be nothing I would care to buy.

I don't mean to be rude but you have already spread false information in this thread and your lack of knowledge is apparent.

I only say this in case someone stubbles on this thread in the future and reads your posts. IMO its really misleading.
Click to expand...

Ok what’s misleading? The only thing I said was sometimes there isn’t a serial number on the neck plate. Sorry everyone I was wrong. Sometimes there isn’t one there because it will be on the bridge if it’s not a Strat, maybe they only applies to a tele. Maybe this only applies to American Vintage reissues not custom shops. I also said yes there should be a serial number there which is odd. Find out more info

The rest of the guitar LOOKS 100% custom shop to me. Find out more info from the seller. How is this misleading.

Regardless we’ll probably never hear from the OP again so who knows.

So please explain to me what I said that could have the OP run out and by this Strat. I won’t to know so I can slap myself.

Intune said:
. This is a vintage reissue custom shop, not a off the wall production model. There won’t be serial numbers all over the place. Yes there should be one on the neck plate but again being a 2005 sometimes they didn’t have one there.

It will be in the neck pocket
Click to expand...

This was false and misleading as I already pointed out.
Last edited: Mar 11, 2021

Yes I stand corrected, thank you. However I’ve had a few custom shop Nocasters, a 52 tele and my current 51 pbass neither had a serial number on the neck plate. They were stamped on the bridge. The only one that came with a floor traveller is any of my current ones prior to 2016. Of coarse they all came with a COA. Sorry for any confusion guys. 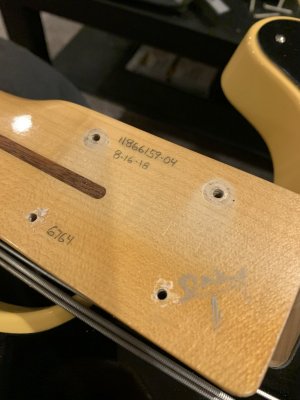 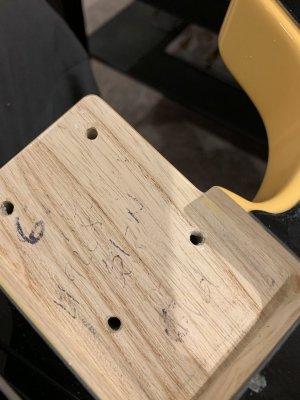 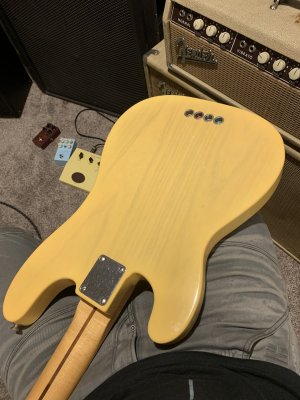 Oh a few more tele’s though. So yes maybe it is just teles that had no serial neck plates. Still the OP is gone and that guitar in question is definitely not as advertised. Much older custom shop if it’s even real. 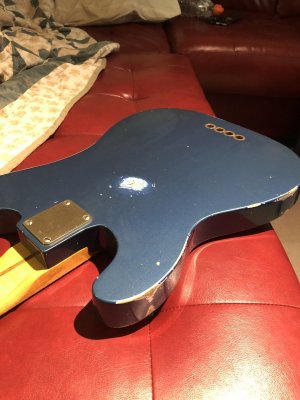 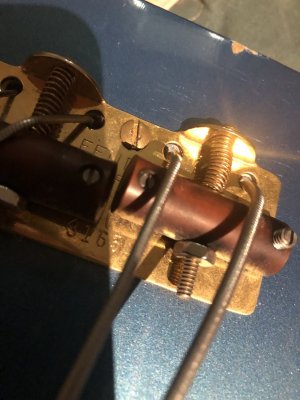 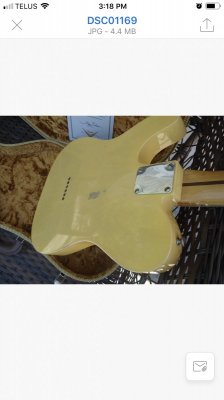 We are talking strats not Teles and a bass.


Looks like the order number and nothing readable in the neck pocket in regards to a serial.

You have a partial serial on the neck heel itself. If you put an R in front of 6764 you bring back a 51 nocaster. I am sure there was also a serial number on the bridge.
Stratocasters do not have serials on the bridge.

So do you see how misleading this is?

OP didnt buy guitar so it all worked out..

No I know it was late. All I remember was thinking it’s odd not to have serial number on the neck plate for the custom shops I’ve had. Oh wait those were my teles. They are on the bridge plate and in the neck/neck pocket.

I’m always learning and trying to educate myself.

Ok beating a dead horse now but check this one out. 1996 CS 54 Strat. Identical to the one listed but has a serial at the neck plate. That is one hell of a fake thr OP found.

Intune said:
Ok beating a dead horse now but check this one out. 1996 CS 54 Strat. Identical to the one listed but has a serial at the neck plate. That is one hell of a fake thr OP found.

That is the same model I have. That is why I posted the one from OP is probably a 90's CS production guitar with a poly finish. A '54 Strat not a '56. My guess is that OP's guitar was misrepresented but maybe not fake. It was probably stolen and the neck plate replaced like you mentioned earlier.
Last edited: Mar 11, 2021

Intune said:
We don’t know the whole story and probably never will, you guys can assume whatever you want but looks like someone spent a lot money to try and sell a fake. I’m not saying whoever faked it is a great guy just saying everyone on here seems to always go right to the dark side without any facts.

It checks a lot more boxes than a obvious fake. NO SERIAL NUMBER yes we see that but it’s a bolted on neck plate, was it removed at one point. We will never know!
Click to expand...

Let's say it is a CS with a changed neck plate. Taking off the serial number - the one thing you can ask Fender about to prove its authenticity - clearly has a huge impact on value and confidence it is what the seller says it is. In a way, it's a partscaster at that point, b/c for a CS, that serial number has real market value.

And as someone else mentioned, if you buy it and decide to sell later, you're now on the wrong side of a difficult transaction.
Last edited: Mar 11, 2021

Intune said:
I’ve never seen any custom shop with a serial number on the headstock ever.
Click to expand...

Well, there’s a first time for everything.... 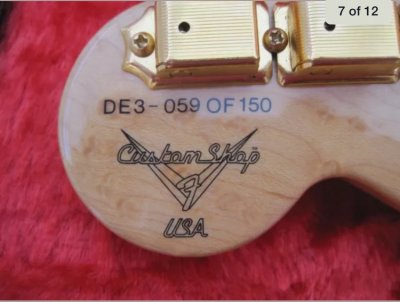 Is DE3 the serial number? December 3rd 59 of 150. Looks like a sweet Birdseye neck

Intune said:
Is DE3 the serial number? December 3rd 59 of 150. Looks like a sweet Birdseye neck
Click to expand... 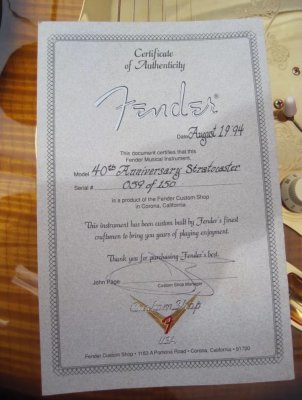 Awesome!! I love pretty much all custom shops but these early ones I find are almost a true custom.

You know, if this is a fake it looks nicer than a real one. It has 8 screws on scratch plate like most early 50s model have. The head stock looks right. If you like it, cool, keep it and move on. later; Crankit.

Intune said:
I know stratman since you’ve been back all you do it seems is bash or politely bad mouth someone gear. In a joking way though. You have a few followers too that seem to always post after you then turns into your own tangent of inside jokes that no one gets, then the thread is dead.

I get it, after years of stupidly it’s hard to look on the bright side.
Click to expand...

So, if I understand you correctly, you're upset because some people who have known each other for years indulge in some "in jokes" with each other. Because you don't understand these jokes, you get upset, a bit like a child at school - "Mummy" Wah!! The older boys are telling jokes I don't understand . Make them stop Mummy!"

Do you have any idea how pathetic that makes you seem? Grow up man. There are lots of "in jokes" on here from various people. Many of those jokes go over my head. But I don't complain about this as it would make me look very sad if I did.

And on top of that, YOU had the audacity to post this:

Well well, what an asset you're going to be to Strat Talk... Why don't you just leave this awful site?

=KARMA= said:
Well, there’s a first time for everything....

Is there no serial number on the neckplate of that guitar?

stratman323 said:
Is there no serial number on the neckplate of that guitar?
Click to expand... 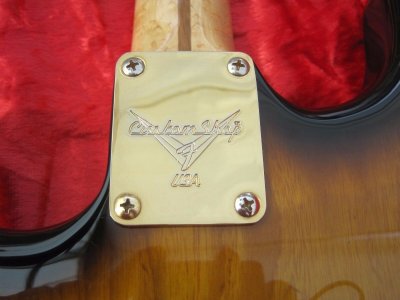 If the DE3 part is the actual serial number, it's inconsistent of the CS to not write that on the COA.

Thanks for that, Fender...

authentic high end items are easy to sell if the seller has proof.

so anytime someone has a high end item for sale and does not include upfront the things an educated buyer is going to need to consider buying - start looking elsewhere.

anytime i am look at high end stuff sold second hand, i boldly ask and watch their behaviour - "is it stolen?" and "is it real?" funny most people start acting real funny and have a crazy story.
You must log in or register to reply here.
Share:
Reddit Pinterest Tumblr WhatsApp Email Share Link