Fender decal on a non Fender neck, just why would someone do this. For me this just wrong. If I built it, my name goes on it. If you built it, be proud of it.

stratifie said:
Fender decal on a non Fender neck, just why would someone do this. For me this just wrong. If I built it, my name goes on it. If you built it, be proud of it.
Click to expand... 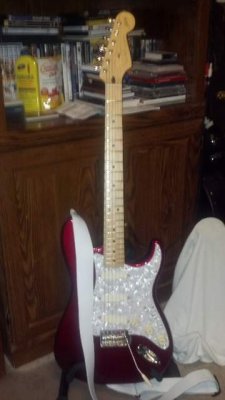 stratifie said:
Fender decal on a non Fender neck, just why would someone do this. For me this just wrong. If I built it, my name goes on it. If you built it, be proud of it.
Click to expand...

And why do you think you have the right to put YOUR NAME on something you didn't design? I really don't care... as long as it's a licensed neck it doesn't bother me one bit. It would be different if you fake the serial number, but a licensed neck with a Fender decal is no big deal to me. Especially since they have a brand at the heel and can easily be checked.

It's the world we live in you have to do your home work!

<-- Devils advocate for a moment.

What if they put a fender neck on an aftermarket body with aftermarket pick guard and pickups, still a problem? Even if you consider resale/transfer down the road as is often mentioned, which of the above mods would make it "wrong".

Point being that players quite often modify an instrument to make it fit/play/sound better. IMO how and what they do is up to them and their sense of aesthetics, especially when they state they have no plans on selling. In the interest of full disclosure, I bought a beater of a strat and rebuilt it throughout with fender parts, the body, tuners, bridge. But replaced the pick guard pickups, worn pots and jackplate with aftermarket parts. Eventually I even replaced the neck with one that wasn't twisted, and when finished put a period correct decal on it. Did I buy a Fender? Yes. Is it the same as when I bought it? Not even close. For me, the decal was an aesthetic choice based on personal preference as to what made it look complete, to me.

Huge gray areas in this topic.. but that's my two pence.

Not a "Fender" partscaster, but my take on a Charvel So-Cal Added my own decal, but from a distance you would think its a Charvel logo.

Way back in the day,there was a fellow in England named Morris who was a mechanic. He owned a garage.....aptly named "Morris' Garage".
Morris like to race cars, Jaguars in fact. He liked to modify his Jags to make them perform better. He modified them to the point that they were no longer "Jaguars"......at some point we began seeing "MG's" on the streets.

If one were to assemble a bunch of aftermarket parts into something that very strongly resembles a "Strat".....should he just leave the headstock blank? perhaps just scribble "partscaster" on it w/ a Sharpie?

For me it comes down to weather or not the owner is truthful about the origins when it comes time to sell.

I dont have a problem with a fender decal on a non fender neck.

My first partscaster build consists of genuine fender hardware and electronics, mighty mite neck and a mighty mite ash body both of which are fender licensed replacement parts, It also sports a fender logo and the word stratocaster on the headstock that I put there.

It's my guitar I built it so I'll do what I please. It will never be sold so no need to disclose anything.

My Squier based builds do not have fenders logo on them and they won't, they get my logo. Lame it may be but it's better than false advertising.

I have a Peavey Predator that I put a Warmoth neck on... besides other mods. I put a water slide Fender decal on it... Gigged that thing for years. If asked I always fess up to what it is. I would never mislead anyone if I sold it. Besides over the years the decal wore off and very little of it is left. I think people should do whatever to their guitars as long as they not trying to misrepresent them in a sale where money is involved.

This is not hard. You can stick whatever you want on your guitar. If you try and sell a guitar that is not a real fender or not made by fender and pass it off as a fender, you can't do that. Don't mislead people, don't lie. If its a fender licensed neck on another body, and you're selling the guitar, that's what you tell people.

I say put whatever you want on it. It's your money, and you bought the neck. You own it, do as you please. If you die and someone buys the guitar, it's on them to figure out if it's a real Fender. i don't just go around buying things with out being informed. It's always the buyer's RESPONSIBILITY. What are you supposed to do, babysit everyone and give a lecture on guitar copyrights and trademarks? If you want the decal to say fender or whatever else, so be it.
C

My name is Mark. I made a partscaster with a Warmoth Walnut Fender licensed body and a Musikraft Pau Ferro neck with Black ebony finger board which is also licensed by Fender. When I can afford the $90 for 2 yards of gold leaf vinyl I will put Fender custom body and Markocaster on the head stock because both labels are true.

little_wing142 said:
I say put whatever you want on it. It's your money, and you bought the neck. You own it, do as you please. If you die and someone buys the guitar, it's on them to figure out if it's a real Fender. i don't just go around buying things with out being informed. It's always the buyer's RESPONSIBILITY. What are you supposed to do, babysit everyone and give a lecture on guitar copyrights and trademarks? If you want the decal to say fender or whatever else, so be it.
Click to expand...

people are gonna do as they please, and that includes the shady ones who try
to intentionally deceive unsuspecting buyers. in today's market it's ALWAYS
"caveat emptor" no matter what.

If it's for personal use and not purposes of deception, and if it is built mostly from Fender and/or Fender licensed parts, I have no problem with it.

On parts that are totally non-Fender, I personally wouldn't do it.

I make a lot of bids on Ebay and even win some, for some reason as soon as the listing says Fender Decal added I move on to the next one. To quote the song "don't know why I just do"

Another Devil's advocate pointing out something I run into on occassion: Personally, I could care less. I have a Fender neck on a Warmoth body. I ordered the '62 RI neck from Fender years ago and it has a Fender medallion on the back of the headstock. I put the water slide on it. Sue me. It's a Fender neck.

BUT, while I know all you guys are honest and would either not sell it, or sell it with full disclosure, you are going to die someday. Whether it is in a car wreck tomorrow or while you're asleep 50 years from now. Unless you discover the fountain of youth, it is going to happen.

And without even taking honesty into account (it's usually just innocent ignorance), somebody somewhere is going to get your stuff. Whether it is inherited, gifted, sold or stolen. And that person may not know details and may decide to sell to someone else. Etc., etc.

Still, I could care less. If I'm going to pay for even used U.S. Strat prices or above, I'm going to do my homework as best I can.

It'd sure be cool to have my own name on a slick decal for my next partscaster.
B

I don't care what others do to their guitars, but this is what I did.
I built a partscaster that was a copy of an early 60's strat. I wanted it to look like an old Fender strat, so initially I put a Fender decal on the headstock to make it look "right". But the headstock shape was a bit different than a Fender, and I thought it would be cool to have a custom logo with my name on it, so I put my own logo on it. The build came out really nice, so I'm proud to have my own name on it.

I also fixed up an old Baby Taylor for my son, and since the plastic headstock overlay had already been removed I put on a decal that looks like a pearl dragon inlay with his initials at the top. He loves it.