Raffi the children's entertainer, when I was like 6 years old, best concert of my life....

That's even more people that showed up when we played The Blue Moon!

They kicked off the show with Statesboro Blues and tore the roof off the place. Just an incredible show.
R

Do you mean personally attended or one that has been recorded?

Continuing with the geezers…. The Who 78.

They kicked off the show with Statesboro Blues and tore the roof off the place. Just an incredible show.
Click to expand...

I was at that same show, it was fantastic. Derek gave it something extra that night.

June 27 2001? If so, I saw them three days after you at the Santa Barbara Bowl. That show was pretty amazing. Full moon, had my girlfriend, walked there from the house, and the sound there is just amazing with the bowl tucked into the hills. Would have rather seen Floyd though in 1973. I was looking at their setlist in Boston and it went from Echoes right into a full rendition of Dark Side.

I just watched a good bit of that AC/DC show. Reminds me of how much I enjoyed stadium rock.

I could go on.

Seen loads but one stands out above all.. Calvin Russell at the at Le Trapendo / Paris.. I would definitely choose Pulse of PF

It's so hard for me to admit, but the best live show I have ever seen was Hank Williams Jr. back around 1985 or '86.
I was not a fan, but was talked into going with a record store work colleague (by a free ticket and a fifth of Jack Daniels).
Jr. did an acoustic set in the middle of the show, and I was blown away.
It was really great, and I found myself a fan of Jr. after that.

Best concert I have attended was ZZTOP
Unbelievable live band. It was the CHEAP SUNGLASSES tour

Interesting sidenote:
Ive never seen so many people throwing up in one place in my life 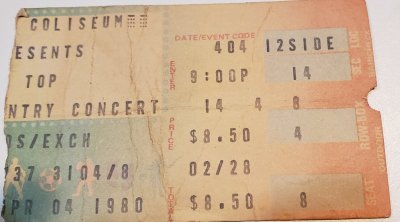