Many many many until Ebay went mainstream, then the deals dried up mostly. Once in a blue moon you stumble on something, but it used to be easy.

Not a fender or a strat BBUUTT I was looking for a cheap bass and stumbled onto this 1992 Peavey Fury for $50. Met the dude in a gas station parking lot and was only mildly nervous I was about to get jumped. Worked out great and after a clean-up it looks and plays great. 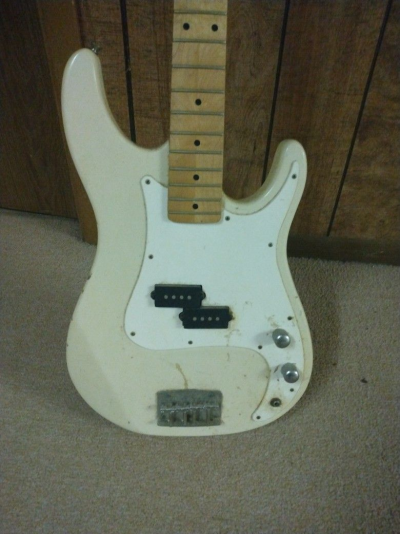 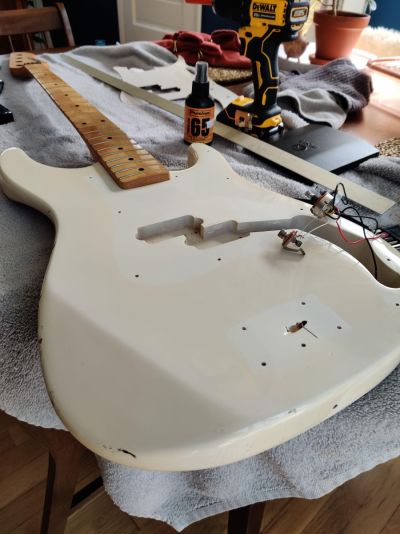 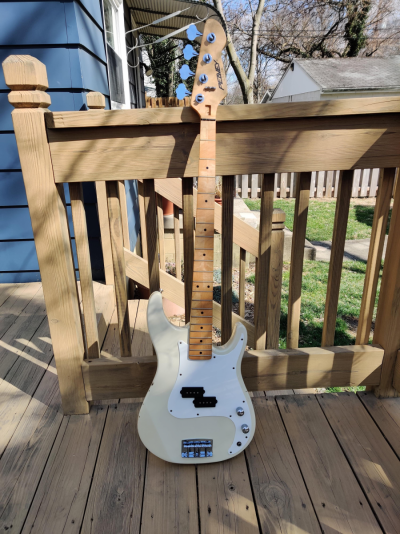 Cajunboy2k said:
Found this little guy in a pawn shop for $40. I installed a Weber speaker and a new preamp tube and she works perfectly. Its from '73. Was hoping it was a '71, but I'll take it. w right ? Wait you found a cat? All I ever found was a mouse. Lol.
S

I wish I could find a vintage strat. All I ever find is lamps nicknacks doilies and clothes.
G

Not exactly a steal but I got my money’s worth. In Spring 1994 I traded a ‘73 Pro Reverb in for a late ‘82 or early ‘83 Rivera-era Princeton Reverb II. Music store wanted $329 for it so I offered him my Pro Reverb and $69 for the PRII. I got credit for all the money I had put into the Pro and later contacted Fender for a new handle, chassis straps, and new amp corners. Got an original owners manual, schematic, and parts list in addition to an amp cover made for a DRRI too. Any amp cover is better than no amp cover and the DRRI was the same cabinet specs as the PRII. Later dropped a Celestion Greenback in there as well while keeping the original speaker in the box the Greenback came out of. Recent prices on Reverb.com had the PRII at $1200 in Good Condition.
G

scubacon said:
I'ma sucker for a good story about "found a '56 strat in a garbage pile",etc.. Let me hear em!
Click to expand...

About 6 yrs ago I walked into a pawn shop and found a 1986 AVRI 62’ CAR Stratocaster hanging. Absolutely mint! Still had plastic on the pg and the original strings. Asked about the case and was told “well we just give you a case that fits”. Guy brings down an equally mint tweed G&G case. When opened up it had about half the original case candy - bridge cover, five way switch, trem springs, trem arm, and hex wrench. Missing the strap, cord, manual and hang tags. Paid their full asking price because he said it had been only been out on the floor for 8 days, $500! My best find ever!!!

I can't gloat. I've never found a good deal via craigslist, garage sales or giveaways in many years.
D

Not Garbage find but pawn shop find--I got a Fender "Telegib" at a pawn shop for $100. Apparently a Japan exclusive and the owner called it a "fake". I bought it becuause I wanted the pickups and figured I could get far more than $100 worth of parts from it. I almost did not plug it in before I took a screwdriver to it. I plugged it in and thought, "wow. Hang on now". Temendous guitar.

I got a Martin HJ-28 with a top seam seperation. Owner called it a "giant crack". I took it to a luthier who advised me it was already fixed and needed no repair.I acutually felt so bad I took it back to the owner and offered it back to him but he wanted me to keep it. Later on the binding came loose and the luthier fixed the binding and also did a better repair on the top seam for me.

I found a Gibson Branded amp (Trace Elliot made) RV-15 for sale for $100. I decided to try my hand at amp electronics. I took it apart and doused everything wiht contact cleaner and it works FLAWLESSLY. That was a score.

I found a mislabled Gibson Country Gentleman Sunrise Orange guitar on guitar center mislabled for $1200. Listed in fair condition. arrived in what I would call Like New shape with the stickers and tags still on it. Probably worth $4k. It is a really "pretty" guitar. Dont play it much.

those are my "garbage" finds.
K

Around 1979 or so, I'd recently moved to rural Northern California. I got the itch to learn to play Dobro and the local acoustic music store had a new one ("Dobro" brand squareneck) for $350. I was a poor starving musician and didn't have the dough but it was in my mind.

Out at the local flea market and a little old lady had a couple tables piled with usual flea market crap. But there were also two beat up electric guitars for $50 each. One was a no name, but one was a Strat: a 1962!! I immediately turned to my GF and between us came up with the $50. First thing I did was call the Sheriff and local police departments making sure it wasn't hot. Then went to the store with the Dobro. They primarily dealt with acoustics and told me they already had one Strat in the store so weren't interested.

I drove to the next small town's electric guitar store. They said they'd buy it, but couldn't pay $350. Remember, in the late '70s a '62 was just an old guitar, not bringing the sky high prices like today. However, a fellow musician friend of mine worked there and suggested that he would trade his newish Guild D-55 acoustic for it. So I called the Dobro store and asked if they'd trade the Dobro for the Guild. They said yes. I then made the Strat for Guild trade, drove back to the other store, made the Guild/Dobro trade and by the end of that same day had my Dobro!

I still own it and still play it, but I wish I had the white '62 Strat these days. As far as I know, my friend still owns it. 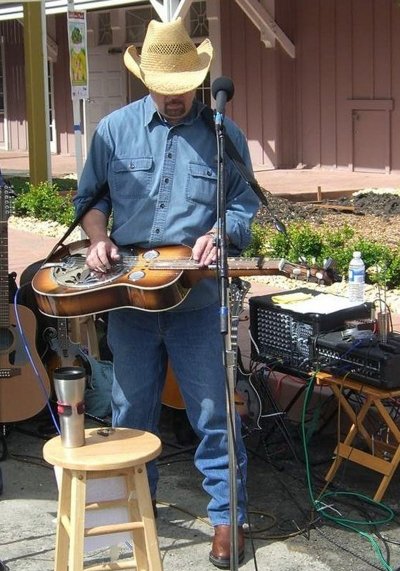 P.S. In the mid-'90s I was back in the electric guitar store early one morning when they first opened and saw a well used Strat on the wall for $350 (again, prices hadn't jumped yet, but it was still a great deal for a USA Strat. It was a Dakota Red, 1973 Strat. The store guitar guy arrived at work (I was talking to the piano guy while examining the Strat) and he said "Where'd that come from?!?" The piano guy said he took it in trade the prior night after the guitar guy was gone for the day. The guitar guy frantically asked if I was going to buy it, to which I simply said, "Damn right!" He was not happy with the piano guy or me. 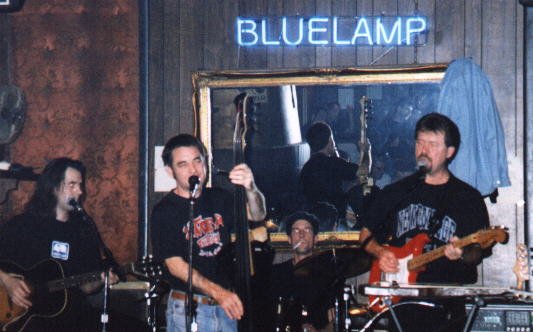 Stuff is much harder to find....I have had a few bargains from Car boot sales.

a £12 1983 Squier Telecaster...in great condition and still playing well after new strings and set up.

Several old valve heads over the years including a £5 Selmer head.

A japanese Cimar bass for £5 and a USA peavey Bandit from a charity shop for £30 just the other week.


I was pipped at the car boot sale to a 1968 Gibson SG which needed a lot of work but went for £75 very distressing.

I found a 1965 Super Astrotone made by Suzuki Violin company on the NextDoor App a month ago. I've been slowly cleaning it up and making it pretty.

Addendum: For sure, I've bought some clunkers, including a Strat neck in "excellent" condition off eBay. Never seen a neck with the frets sticking out so far. Must have sat in a sunny Arizona window most it's life. 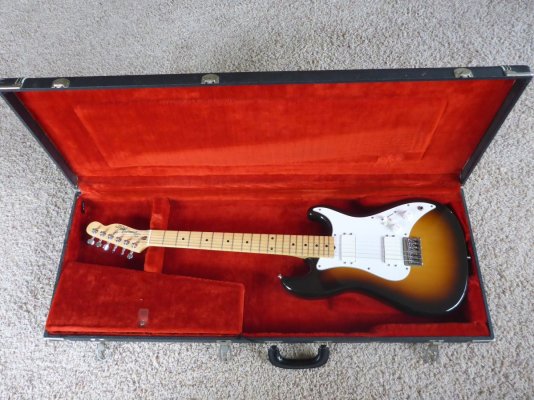 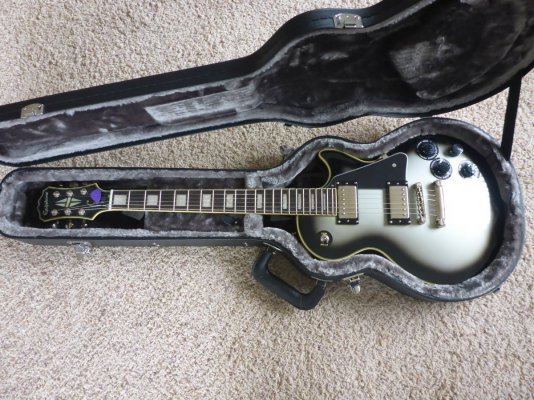 The local Goodwill store used to put out a selection of clunkers during the Fillmore Jazz Festival in SF. Found this heavily-adulterated MIK Strat in the pile for $170, and figured it would make a good project. Scraped off a bunch of electrical tape and other garbage, dropped in a surplus pick guard with Lace Holy Grails, and whaddya know?! Great travel guitar, and for banging around with the grandkids.

I know some of y’all around here don’t like to read long stories, so here’s the Reader’s Digest version:

I got this at a garage sale for $1.00
It’s been through some journeys, but a couple of years ago I got it back up and running, and now my daughter and I fight over it. 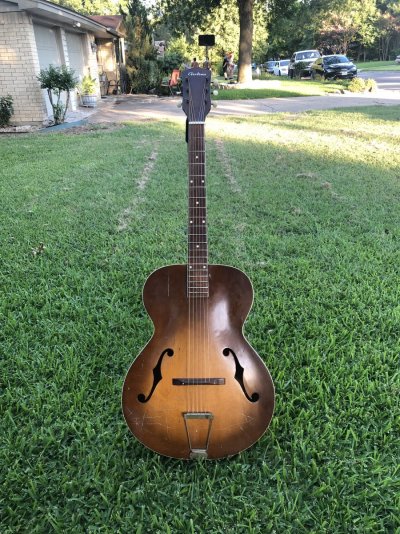 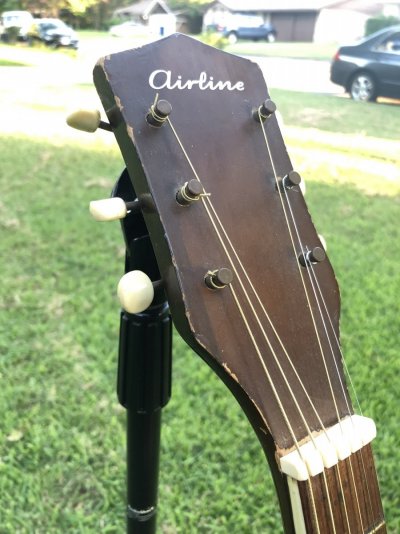 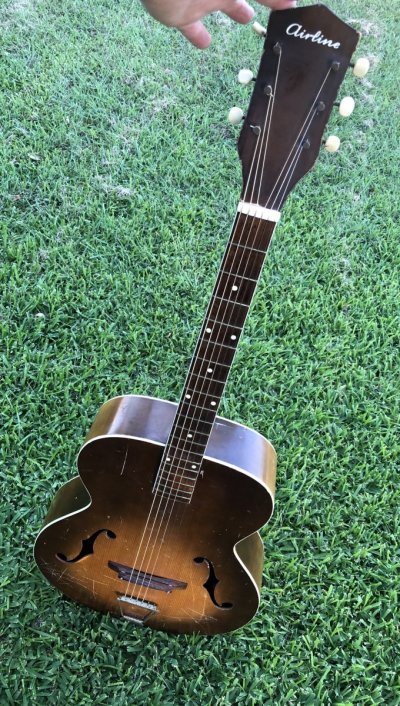 Here’s the longer version for the more literate amongst us:

The Resurrection of Opal Faye

A little more than 20 years ago, I was called in to work on a Saturday, and as I drove down the street, something caught the corner of my eye. I figured I had to stop, just to see what it was... It was an Airline archtop acoustic...one string, broken nut, dirtier than a politician’s mind...

Both purchased in the mid-1980s