Status
Not open for further replies.

nutball73 said:
I don't remember much. It was fantastic though.
Click to expand...

I probably remember less. Oh to be 20 years old again...

I turned 20 that May. Was working a pretty good job that didn’t take up much excess time, paid pretty well for the time and where I was in life, my expenses were near nil (I think I was paying about $125 a month for my share of a rental unit), so I was going out to hear music about any night I could. Drank some, but rarely much. I’d already smoked the world’s supply of weed from about 75-77 and I was done by 79. Did shrooms from time to time, but not really as a party drug. Except for shots of tequila and beers some weekends, I wasn’t partying all that much. I had just gotten into guitar though, started with an awful acoustic toward the end of ‘77 and by ‘79 knew I was into it and finally had the $$, so bought a great used D28, a used strat, and an amp early tin ‘79, and was playing constantly. I remember playing at some great outdoor parties and having a blast, but I think that was more 80-81, in 79 I was still just trying to get decent. 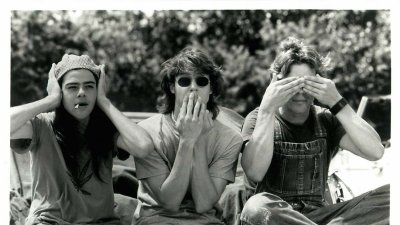 I should have bought a Fender boat anchor back then, and held on to it.

I was listening to music, smoking weed, and hacking stuff up with my guitar. It was pretty much the same as now.

I was probably watching the dukes of hazzard, and eating ice cream.
I was about 8, and in bed by 9.

I was 16, just got my license. One of the best years of my life.

Turned 20, and did a lot of flying.
The older Vietnam Vets supervised my progress in both flying skills and drinking alcohol.

Was 'sitting around the picnic table out by the barbeque grill, eating grilled rabbit and drinking beer with older combat Vets' considered partying?
Not sure.

Some good memories, some bad.
I survived it, I reckon.

In ‘79 I was on a path to self destruction!
Drugs and alcohol nearly did me in
Somehow I survived.
A few of the group I hung with did not.

In ‘79 I was still a little boy living with my old folks and a couple of their friends in some hippie ranch just outside town with lots of vinyl records, a couple of books, a shotgun and no TV or fancy cars…

Of course I don’t remember much of the year ‘79 but I do remember those times, when the world around me looked and felt much more ‘real’, with less plastics all around and stuff like turntables and cars were actually built to last.

A couple of years later I started discovering relationships with the girls but that’s another story.

Disco was either dying or dead and rock was back in several new forms. Weed was getting much stronger and better Blues, brews, and BBQ was on the menu big time.

duzie said:
In ‘79 I was on a path to self destruction!
Drugs and alcohol nearly did me in
Somehow I survived.
A few of the group I hung with did not.
Click to expand...

Traveled on that same path ....

I was 4, so parties meant getting together with other kids and eating cake. Sometimes if we were lucky there would be little paper hats. And whoever was having the birthday got some presents.
B

Keggers, girls, muscle cars, rock and roll. Ski trip in 67 GTO convertible with the top down, Aerosmith in the 8 track. HS graduation. And lots of stupid s...

Status
Not open for further replies.