SG's are better than any other guitar because?

ThreeChordWonder said:
Mine is a 2015 Standard, which is completely standard except for modding the wiring for independent volume controls, Schaller strap lock buttons.

The neck dive doesn't bother me, mostly because I "play" (ahem) sitting down, and as it was the first electric I bought, I figured "yeah, they'll all do that".

Stock photo - identical to mine. Luckily mine never had the robotuners fitted.

I had one of those. The Robot Tuners sucked. I did like the adjustable nut though.

You've gotta get up!, to get down!

But I'm a Fender Strat' or Charvel (for grunt) kinda guy

I've never had a problem with the headstock diving that I read about, but I've never had a headstock break on a Gibson either and my daughters mother literally picked up my Les Paul and threw it across the room into a stereo and bureau, chunks out of the back, yes, broken tuning machines, yes. Headstock, just fine.
Still have the daughter and the LP.
Women is thankfully long gone.
SGs
'91 Celebrity 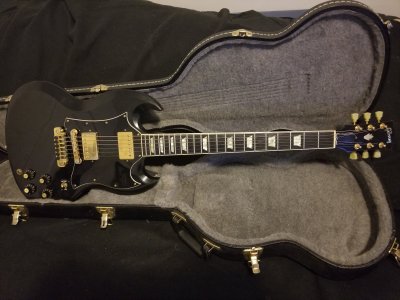 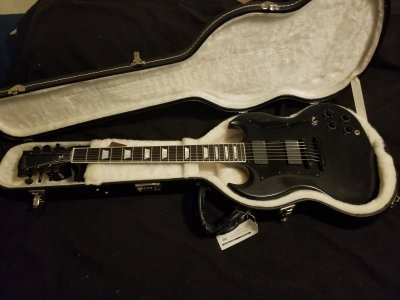 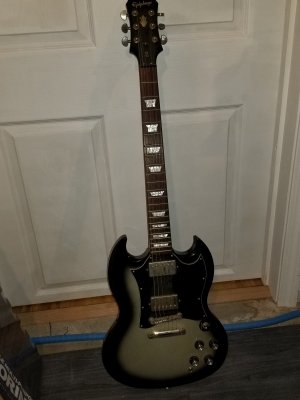 Such a great design Fender bought Guild so they could make something like it.
Squier Series 24 S-73 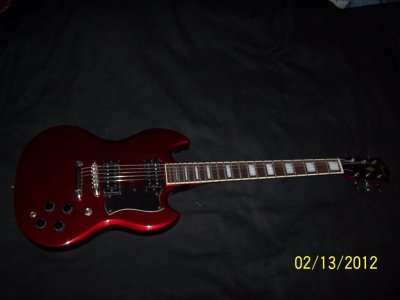 ThreeChordWonder said:
Jimmy liked them so much he had two glued together...

SGs are best because you can plunge them into your bandmates for the ultimate finale to a show: Here are mine. '07 and '84 SG Specials. Biggest influence for wanting one - got to be Angus. I guess I'm lucky, no neck dive with my old 61 Jr.
Here's a before and after shot, went from wobbly neck to rock solid. Because they disappear when turned sideways.

And because Buck played one. 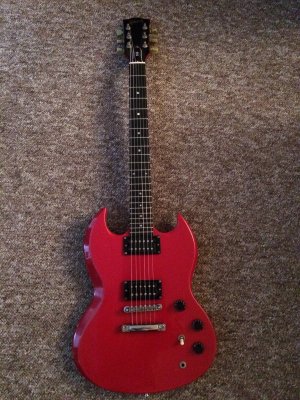 My SG is by far the lightest electric guitar that I own. I've got some nickel plated pickup covers on the way for it. Just like that look on the full guard models. The 490R and 490T combo sounds like an SG should. As far as playing goes the neck is a slimmer profile, but it plays very similarly to my other Gibson. To me a Fender 9.5" radius is the most comfortable but you get used to the 12" radius after a few minutes of playing. 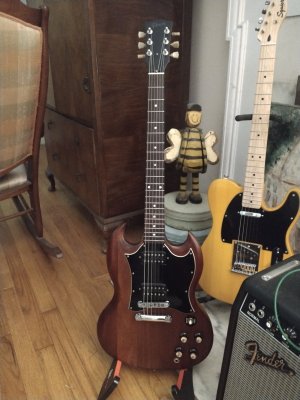 Cerb said:
Universally true for everyone:
1: they don't look like something you'd take to Sunday school
2: they are what LP's wished they were
3: of upper fret access
4: they have personality

Their headstocks are so hard to break off when they fall ?

I have a red one...a reminder of my youth.

PCollen said:
Their headstocks are so hard to break off when they fall ?
Click to expand...

I wouldn't know, never broke one.

I’ll stick with Stratocaster and Tele’s.

Somewhere in the Ford Galaxy...

Funny, the reason I have the aforementioned red SG was due to witnessing one of the guitarists, in a band I was working with, smash his all over the stage. Crazy stuff considering he couldn't afford to replace any of his gear at the time. It was the result of a temper tantrum over a broken string during his big solo.

Cerb said:
Universally true for everyone
Click to expand...

I stored this SG Custom in the case in a closet. It was there for years as I had other axes I preferred to play. All the gold on it was bright and shiny when I put it into the case. When I went to open it years later I saw that through electrolysis all the gold had disappeared. I yelled a few words for several minutes then resigned myself to somewhat less than gracefully accept the situation.

Note the vibrato. It had the Gibson vibrato I hated that pulled up towards the guitar when it was new. (Like the white SG Crashbelt posted earlier) The pot metal arm broke twice so I replaced it with a Bigsby. I did not care for the middle pickup so I took it out and bought a two pickup pickguard for it. I took the arm off the Bigsby as the Gold was eaten away on it also. I put a new set of strings on it and made it a hardtail. (That will change one day)

For my personal playing taste I made several modifications such as having the Gibson Custom shop put an EXPENSIVE "Fret-less Wonder Ebony" fingerboard on it, which they did a crappy job on. They made it unplayable in the upper register. That is why it went into the closet. While it was still playable, before the Custom Shop debacle, I did the following:

I put a varitone in it.
It has a Dimarzio bridge pickup
I moved the pickup switch to the upper body
I put a pickup split switch in it.
I put a phase switch in it
and I made a couple other mods that were useful to a gigging musician.

I realize that purists might cringe, but it had all the features on it I wanted. I wished that I had never sent it in to the "mediocre luthier division" that Gibson calls the custom shop. I would have sent it back but it took around 6 months for them to destroy it. I simply moved on to one of my other axes for gigging. After those feck-less Gibson Custom Shop bastards destroyed my favorite axe of the day I swore never again to buy a new Gibson product. I still get angry every time I look at it.

Now I only play Strats and Teles. I have two Les Pauls that live in their cases and My Gibson ES 336TD lives in it's case. 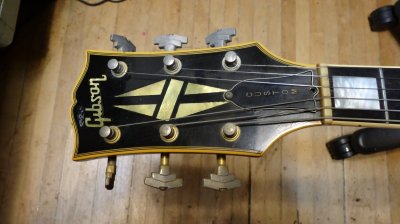 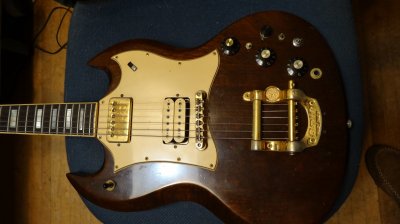 Vibrato arm on just for picture 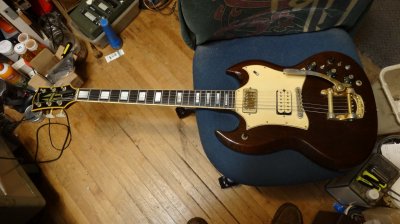 I had one for a short time. I didn't care for the way whammy bar effects come from just the grip on the neck, and the whole neck just bends like a wet noodle. But I can imagine how other people might like that.

Cerb said:
Because SG's destroyed all other guitars.

Ha ha......so you have to pick the only guitar I truly loath?

Dunno what it is but I just can't warm up to them. Don't like the neck or the way one hangs on me. My jam buddy his a nice one and every once in a while I'll pick it up thinking maybe just maybe.....but then, nope. Can't make it work for me.