For the past couple of years, techniquewise I've been focusing on my hybrid picking, and I've gotten to where I'm pretty satisfied with my skills there. The pick and three fingers are all happily plucking away. I like to work to an agenda, or several of them, when I practice. Sometimes it's technical stuff; sometimes it's more music theory. Recently, as an example, I've been working on diminished scales, on making them fit into my usual stuff. I just started looking into Arabic music. A while ago, for about a year, I rarely let myself use a flatpick, in order to work on my fingerpicking. In the end, I just found fingerstyle too fussy and twinkly, too autonomic, too pretty maybe. I know that a bum take on the matter, of course: I'll get back to it some day. (After all, two words: Jeff Beck.)

I thought I would go back to working on flatpicking. I've been foregoing the hybrid picking lately to see what that does. I tried to figure out Benson Picking, but I think (emphasize think) that it's something I tend to do anyway, particularly when I pick closer to the bridge. Then I tried picking without ANY point of rest or leverage, just that flat pick floating above the strings: none of my usual pinky-resting-on-the-pickguard. I didn"t even rest my arm on the lower bout. It was interesting how relatively easy it was to make the change. Unencumbered, the pick kind of dances and flits around, and there's little more lilt or lightness in the picking. The heel damping sorta drops out, though, since the heel of my hand is floating around midair. I've been watching Oud players lately. Their hands seem to float above the instrument, holding onto that oddball pickstick they use.

Anyway, I'm wondering if anyone has undertaken something in the area of flatpicking technique that worked out for them. I play the usual jazzbluescountry hybrid sort of music, with maybe a little Scriabin thrown in (When I hit a wrong note, I ascribe it to my interest in Scriabin.). 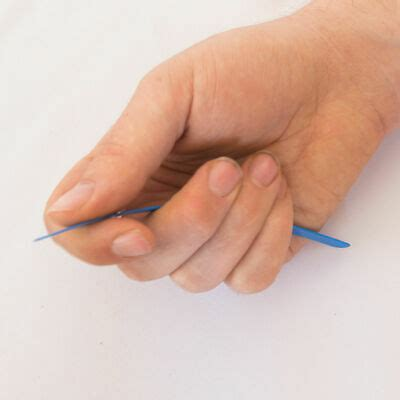 I use jazz III picks, and though it's hard to describe, what I do is something like this:

1. Make a loose fist (super loose, just the general shape) and then lift up your thumb.

2. Place the pick on the side of the index finger right at the first joint of the finger, so that the bulk of the pick is covering the bent finger at the joint and a small part of the tip is extending past the finger.

3. Press your thumb down to secure the pick in that location. Again, the point of the pick should be extending a little bit past the finger (i.e., enough to hit the strings without your finger touching them), with the meat of the pick being held by the thumb pressing against it and the side of the finger. Experiment to find the best angle and what's most comfortable.

To play, keep your hand in that general loose fist shape, and move your wrist (and maybe some micro-movements of the thumb and finger) to hit the strings. When you get used to it, it feels like a very natural position, and your hand will tend to stay relaxed and glide around like you're describing without being anchored down to anything.
Last edited: Jan 30, 2022
You must log in or register to reply here.
Share:
Reddit Pinterest Tumblr WhatsApp Email Share Link