StratUp said:
This video is a summary of my objections to almost all youtube gear demos... gobs of distortion on max. I can't tell anything about a guitar, pedal, amp, or player, when the distortion is this high.

This guy is unapologetic about that "This is a metal channel" and that's fine. But I find the video useless for the rest of us.
Click to expand...

Agreed. I didn't notice any particular differences in their sound, but there could be differences there, buried in the distortion.

Then again, they're all playing the same riff, at the same tempo and with very similar technique. This particular test seems designed to rule out any differences that may come from the mind, creativity of the player and such.

i have nightmares my superchamps sound like that...thats waaaaaay too much gain or distortion...what ever it is

Tone is in your brain. End of story.

Just dropping this video here, showing that basically nothing matters, and you can make a gap between a table and a counter sound like a Telecaster.

INRI said:
The other end of that argument is having two guitarists play, one of them plays bar-chords, the other plays single notes - and then remarking how much the tone must be in the hands, because they sound so different.
Click to expand...

Sure, this definition of "tone" doesn't 100% equal "timbre", that's why they don't say "timbre". But different players sound different even when playing exactly the same notes. It's in the picking technique, the way they feel the rhythm, subtle quirks of the vibrato or bending notes out of tune, palm muting, muting or not muting the "wrong" strings etc.

INRI said:
It seems to me that the reason many of you think the tone is in the hands isn't that the hands are shaped differently, therefore sounding different. What I get from the most of you is the argument of "choice". He chose to hit the strings so and so hard, articulate himself this and that way, with lots of legato.
Click to expand...

A lot of it is not so much conscious choice but instinct and a summary of habits. Including "bad" habits. And it's equally true for other instruments. For example, not even John Bonham's son substituting for him at the 2007 Led Zeppelin reunion managed to fully reproduce his style. And he literally learned to play alongside his father! Many other drummers tried to get that "tone" all their life. And they use the correct vintage equipment. Hardly anyone succeeds. Those that do dedicated decades studying the habits not just the choices. And it's the habits that are harder to adopt.

Similarly, someone like Paul Gilbert or, say, Steve Vai, even though they are way more technical than Jimmy Page, would not be able to sound like him. Because first they'd have to unlearn stuff before they get there.
Last edited: Jun 30, 2022

Turn your amp on, leave your guitar on its stand plugged into the amp and wait. Where's the tone? It may squeal with feedback or hum loudly, but there's no tone till your hands touch the guitar.
The sound comes out of the amp, your hands make the music. And that is where tone is in your hands comes from. There are unlimited styles, effects and technics that complement tone, but the hands generate it.

Tone is in your brain. End of story.
Click to expand...

Exactly. We reproduce the tones that we are searching for with our brains. That may include overdrive, delay, phase, depending ultimately on what you are wanting to sound like.

I can take nearly any amp, that’s within my style of play and dial it in to sound like me.

INRI said:
When do people commonly use the phrase "tone is in the hands?"

They usually don't say that as a response to a discussion regarding playing technique (that would be a meaningless comment). It's usually said when discussing recording technique. So it is not me who's misusing the words, I'm just paraphrasing what is said.

Legato and staccato? These terms has to do with the length of each note, not "tone".

Of course technique changes the sound, just like giving the guitar to a squirrel would dramatically "change" the sound. Noone is contesting that. But we have to assume that we are comparing guitarists who has a somewhat good handling of the particular style (f.ex funk, jazz, blues, etc). If they do, then these differences that you talk about are very subtle.
Click to expand...

Look troll, you don't even know the meanings of simple words. Length of notes? People talk about tone only in context of recording?

Enjoy your made up nonsense.

I have what I think is a good ear, but my hands are tone deaf.

My teacher has played my git a few times now
No change in settings
He has a way better tone than me
Gotta have something to do with the player.

Just dropping this video here, showing that basically nothing matters, and you can make a gap between a table and a counter sound like a Telecaster.
Click to expand...

This particular youtube influencer has provided a good argument for the premise that there is no intelligent life on Earth.
His kiddy pool with yellow glue hits like a coffin nail. 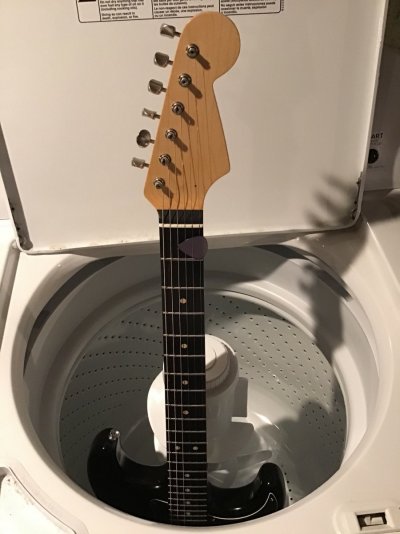 Hanson said:
Exactly. We reproduce the tones that we are searching for with our brains. That may include overdrive, delay, phase, depending ultimately on what you are wanting to sound like.

I can take nearly any amp, that’s within my style of play and dial it in to sound like me.
Click to expand...

Hell I keep buying more gear and no matter how different the pedals and amps are from the last buys, every damn piece of gear sounds exactly like me!

Then I have been told I like a really bright tone which is fair since I play Esquires with no switch or tone control.
If I sound too bright I cut treble at the amp and or the pedals but I still sound too damn bright because I just wrassle and wrangle the strings to produce the tone I expect.

Ive tried dialing in two dirt pedals to different tones, one bright and one dark.
Then play for a while and record switching between the two tones.
They end up sounding the same!

If Mark Knopfler strummed an open E chord, and then handed me his guitar, and I strum an open E. Will it sound different?

Stratafied said:
If Mark Knopfler strummed an open E chord, and then handed me his guitar, and I strum an open E. Will it sound different?
Click to expand...

What is your skill level?

PonyB said:
What is your skill level?
Click to expand...

Do you play with your fingers like Knopfler does?
Can you replicate his attack?

Guithartic said:
I was trying to figure that out too.
Click to expand...

Looks like the two threads have been combined. Does that make it part 2.3?

PonyB said:
Do you play with your fingers like Knopfler does?
Can you replicate his attack?
Click to expand...

INRI said:
Jimi Hendrix, one of the most famous strat players, used huge amounts of distortion
Click to expand...

We're having a tone debate with someone who thinks overdrive is distortion.