What is your guitar project today?

Impulsive guppy said:
Debating with myself on changing to a regular Strat jack plate.
It would only be for looks, because I like to use the one I have now with a right angle cord.
Click to expand...

Um, I use a right angle chord all the time with Strats. My two main guitars are a Strat and an SG. I refuse to use a straight cable into an SG.

You can use a 90 with the standard Strat Jack plate. At least I've been able to use any right angle chord I've ever owned with any Strat I've ever owned. I haven't owned all the Strat's and chords there ever was.

Teles???? Not so much. They usually get an Electrosocket.

Clickitysplit said:
It is done. We have tone (yessss!). Setup to ensue. Pick guard was not a perfect fit - holes were drilled. Need to trim the heel and bridge contours on the pick guard - maybe 1/16” each. Fit is too tight.

Is that Candy Tangerine?

> Is that Candy Tangerine?

Saddle shaved down .05” and the action is much better now, but it did confirm that the nut without the double sided tape is too low. Only low E buzzes out, the rest are OK so I fit a 0.005” shim under the nut and it now seems fine. There’s no buzz unless I really hit it hard, which I don’t . . . 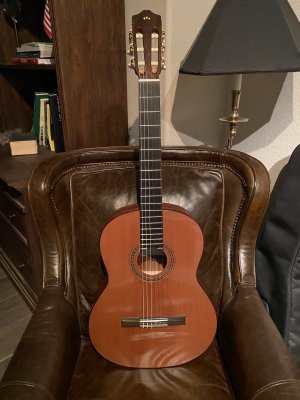 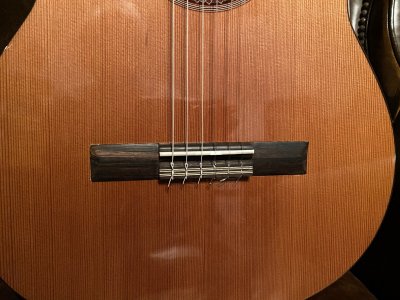 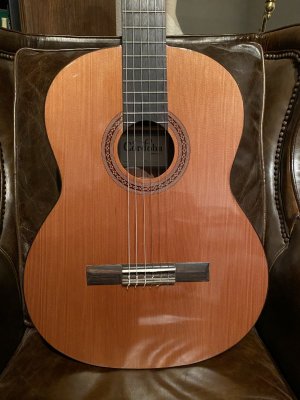 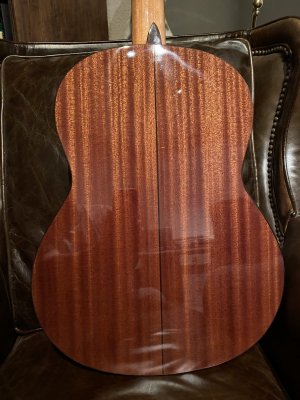 Still waiting on winter for less humid days..
Then will be shooting some nitro.
My srv scotch build is on hold for that.

I will have to address this. It's a friend's guitar on which I did a nut replacement. I saw at the time that this will become a problem because cracks were developing. The break is clean and fits nicely so I guess the toughest part will be doing a natural wear finish on the back. The original one is gone so the wood is pretty worn.

Tone Deaf said:
Leveling some high fret spots, then polishing the frets on my 1995 Strat Plus.
This is dependent on finding my tri-corner fret file. It is missing in action.
I’ve been looking for it these past 3 days. All my other “ luthier” tools are in the dedicated tool bag.
View attachment 500831
Click to expand...

That's a nice looking guitar. What are these pickups?
M

Just picked up a new Duo Sonic HS and all it really needs is a setup!

Impulsive guppy said:
Debating with myself on changing to a regular Strat jack plate.
It would only be for looks, because I like to use the one I have now with a right angle cord

That is actually very cool. I was thinking about where to put a switch for coil splitting and this seems to be a nice solution.. LOL. How did I not think about it before, I could make it out of copper, would look nice and relic. I use a right angle cable with Strat jack plate when I play my "Hendix" Cort. It is more convenient.
BTW, the neck looks awesome.

just bought one of these.... 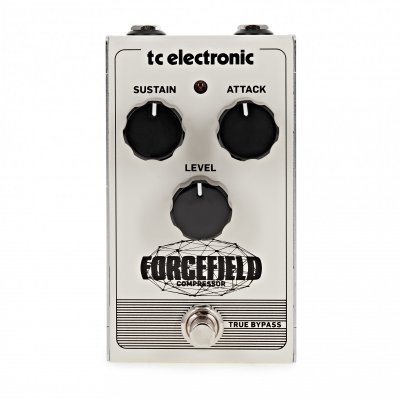 Scream for me Strat-Talk!

pn8830 said:
That's a nice looking guitar. What are these pickups?
Click to expand...

Those are the original Lace Sensor Gold ( not hot golds ).
1995 Strat Plus

Practicing for me, but getting ready to mod My Revstar 620 to what i'll be calling it the Red Line edition
Got My set of Alnico II 59 PAF from Planet Tone along with New Pots and Orange drop Caps
Now have to wait a bit more for the CFO to clear some more funds for new bridge and locking tuners

Just finished this one up. It's an old Harmony strat body, changed out the neck with licensed WD and put some early 80's dimarzio pickups in it. This is stuff I had in the parts drawer. Yes I added a logo to the neck, finished it in nitro. I always write parts caster in permanent marker inside the control cavity and on neck heel of I add a logo. I also left the contoured body logo off. With this one, the bridge and body shape are dead giveaways it's not a strat. Tuners are gotoh. No serial number on the neck. 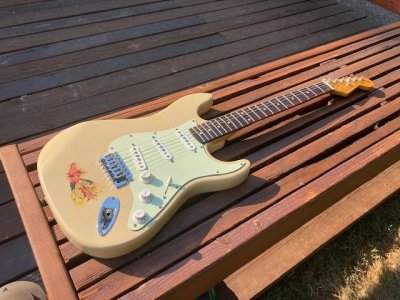 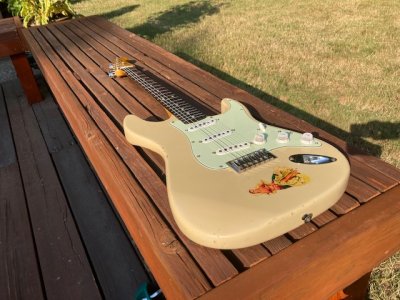 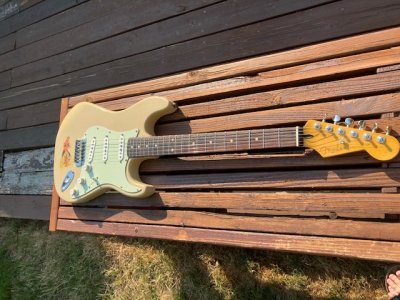 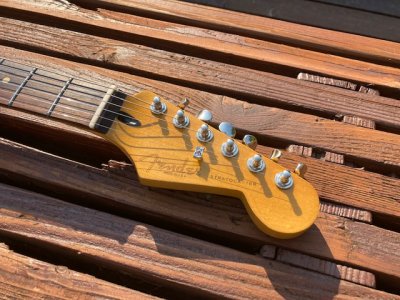 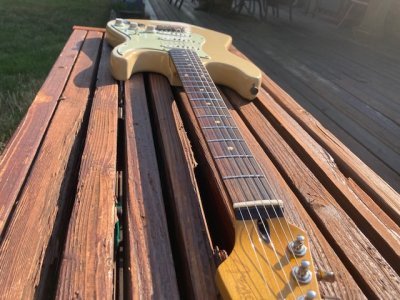 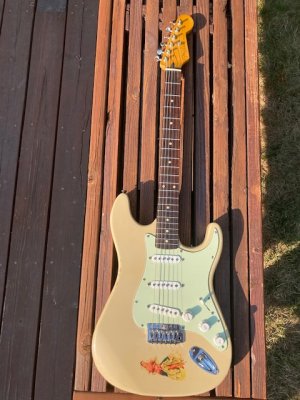 Going to at least start on getting the MIJ Jackson Dinky i recently bought all set up. I have three other guitars with Floyds, and think I might just try blocking this one. I'll take pictures if I get around to it.

Played out on Saturday, now I am reassembling the jam room. Drums are now set up, taking bit of time to clean up some stuff along the way.

I don't know why I am chasing down stuff no one else wants and I really don't need.

It usually always ends in disappointment.

Got a call that a hunting buddy saw some old guitars or parts in a barn in NE Arkansas.
When I got there I told them nicely that they had junk, one may be firewood the other Japanese junk.
But I went ahead and bought them because I thought I could make out the Fender telltale signs even under a quarter inch worth of paint. Told them I would try and make a silk purse out of a sows ear.

The pre-77 hardtail body was literally a partscaster, it was in two parts, broken in half with an Elmers glue job barely holding.
The combination of a huge mineral streak with country boy over tightening of screws snapped this body in half.
My guess.

After taking off 10 layers of latex over poly over nitro over poly black finishes and fixing a poorly done repair, the pre 77 body has it's tap tone back. Will re-dowel one of the poorly drilled holes in the neck pocket so it aligns and looks better.

The real surprise was what I thought may be a Japanese body turned out to be a '69 Fender body, it had a very old Japanese neck(60s?) with a old BR fretboard but had the smaller screw pattern originally. Everything else was not original and looked to be of import origin. No bridge hardware to be found.
Later I talked to an Uncle who said he had a photo somewhere of him standing in front of his brand new black 69 Z28 with his brand new "black" guitar. Black Z with white racing stripes and a black Strat with maple neck and white pickgaurd. Sharp!
Asked for a copy of the photo, he laughed and hung up on me, must of thought I was weird.
I asked my buddy to ask him, he did think I was weird.

Funny the Candy Tangerine reference since that is what the '77 is going to be.

The 69 will be either Olympic white, Ocean Turquoise metallic or Blue Ice metallic. Still deciding.

Final sanding this week and order in what supplies I need.

Already have some killer era correct necks picked out.

Paid 50. bucks for both, now I kinda feel like I should mail em some more money. It's just Alder anyways right?. 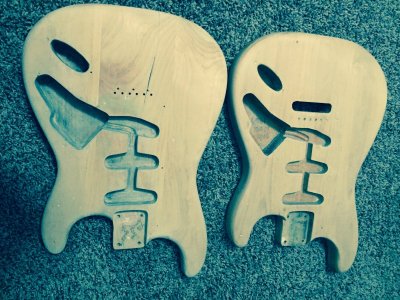 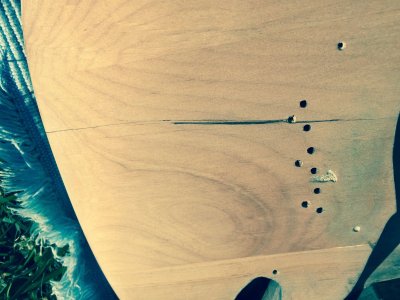 Picture is random Internet but happens to have the pair and colors I'm working on.