Why don’t we like active electronics in a guitar?

I knew there had to be something wrong with you.

BTW, I almost didn't recognize you because you changed your avatar.

Lucius Paisley said:
For the right guitar, they're fine. Like in ESP/LTD guitars, because that brand has got SFA else going for them
Click to expand...

Have you ever played one?

This LTD (passive pickups) definitely does have SFA going for it. Like feel and sound. It is my most played guitar. 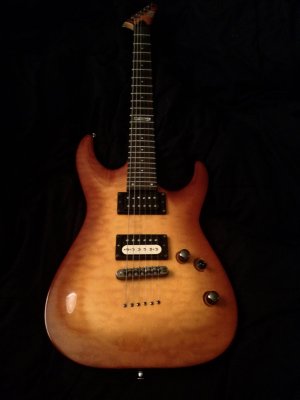 Ebidis said:
I knew there had to be something wrong with you.

BTW, I almost didn't recognize you because you changed your avatar.
Click to expand...

There's a reason for that. I'll pm you later about it.

Electgumbo said:
I build my own preamp with treble and bass boost and cut back in the early 80’s. I used it for years. It ran on 18 volts and was a heck of a contraption. It was called a Craig Anderson Clarifier and was in a GP magazine with Frank Zappa on the cover. I drilled and etched the board and every thing.

I would put EMG’s in my other guitars so they could almost keep up with my Strat with my home made preamp in it. My Focus 6000 Kramer still has EMG’s in it from the 80’s.

You can see the wire running to the guitar strap where the batteries are in the photo from under the pick guard ….. this is 84 or 1985… 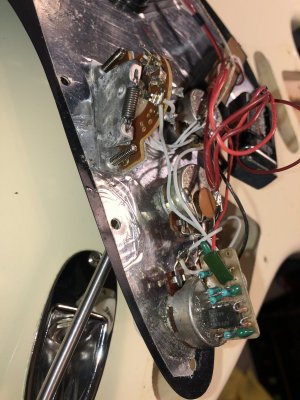 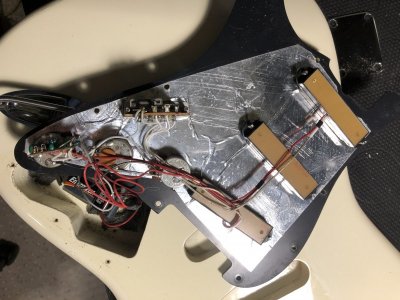 I remember them coming out in Ibanez guitars in the 80’s and they were well received. The only thing I can remember is a booster being fitted to the Clapton Strat.

While people will say use an EQ pedal, I think an EQ for a particular pickup is a nice touch, this isn’t so hard in a Strat as it is in a Tele.

What are your thoughts?

2. Different EQ would be required for different pickups, or a universal adjustable EQ, which would lead to 2., above.

3. Aftermarket choices are available for those who want it. For instance:

4. Look at the success, or lack thereof , of 2014 Fender American Strat Deluxe Plus having inactive swappable modules.

5. Start a poll post, asking if forum members would favor active electronics in a guitar, or not.
Last edited: Oct 10, 2021

There are multiple psychological issues at play here.

One, the sound we think is best is what we imprinted on in childhood. We are no better than baby ducks in this regard. Whether it's Clapton or Hendrix or Charlie Christian or Eddie Van Halen or Stevie Ray Vaughan or someone else, we all have a particular "best" that we'd like to sound like.

Two, it's much easier to recreate the same formula our "hero" used than it is to build that same sound out of entirely different gear. For example, if your hero is Hendrix, you get a Strat and a Marshall and a Fuzz Face and a Wah and a Univibe. That's simple. You have a formula, it's well known. You can make substitutions and still get close (your fuzz doesn't have to be a Dallas Arbiter) but the closer you can stick to the formula the closer your rig's timbre will be. Getting that sound out of a completely different style of guitar is going to be more complicated. Harder. Getting that sound out of a different style amp (solid state for instance) is also harder.

Three, basically all of the equipment built and sold for guitar was built around passive magnetic pickup technology. Amps and pedals are built around an assumption that the input signal will be approximately that of a magnetic pickup (140mv to 1.4v). While you can clearly make that size signal with active electronics--they're not limited like that. If guitar electrification happened for the first time in a modern electronic world, sane engineers would use a much higher level, for improved signal-to-noise ratio. At least line level, if not headphone-out level. And all of the amps and pedals would be built around that assumption instead. Nobody would bother with tubes, those have been obsolete since 1970. That solution might be objectively better, but it is incompatible with all the old gear (which we've already established is "best" to many of us). And even though most gear is built around magnetic pickup levels--many active pickups output higher levels when the volume is full up. This doesn't sound great with all gear. Many guitarists don't understand that knobs can be positioned other places besides full up.

Four, many of us have experience with crappy batteries. We had toys, flashlights, tuners etc. that were battery powered, and we associate batteries with cheap toys that quit working--and that often won't work even after replacing the battery. We've had cell phones and laptops where the battery quit taking a charge and swelled up. We've had cars, so we know car batteries have to be replaced--and we know they can be gross and funky when they're at the end of their life cycle. Batteries last somewhere between a few months and a decade; passive guitars can last essentially forever. And see again re: we've imprinted upon 50s and 60s guitars sounding best--even though they're now 60-70 years old. We don't want our guitars to be crappy disposable toys.

@Exhead
At first glance they do? The didn’t make SA in 79’. Just S. Can you see the EMG on the front ?. Mine all had a sticker with S or SA on the back. I had the EXP control (which sounded awful) But I didn’t have any as old as yours. Mine are from the mid 80’s. But yours look correct. Your had that brown or tan epoxy sealing the pickup. Mine are all sealed with black. How do you like your. They should sound pretty good!

These came off of the pre-serialized era 1981 USA necked partscaster I just acquired and sold for a nice profit. Played great but i saw $$$ and jumped at selling it. Sounded great too so I bargained keeping the pickups.

I contacted EMG and they got me in touch with Rob Turner (EMG founder and chief engineer). He identified it as late 70’s / early 80’s, and though the 1979 estimate is probably accurate. In his words “Oldie… but a goodie…” 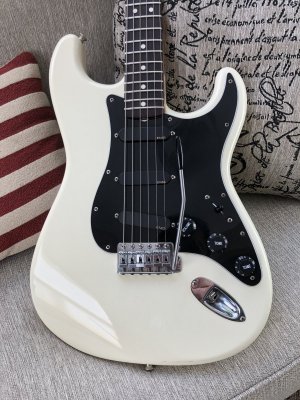 Ok to keep it short and sweet. In the simplest terms I can muster I’m gonna repeat what I told the old master amp guru in the area. He said “ You made a cute little circuit Slim! What do you like about it??”. I scratched my head and told him “Mr. Bud the notes jump out the speaker better.” That’s what I remember about using active electronic guitars. The EQ stuff was cool but the immediate response from the amplifier was what blew my skirt up. Favorite active guitar is listening to David Gilmore’s Red Strat on Delicate Sound of Thunder.

Why don’t you still use active guitars Slim? Well SRV and EJ rekindled my love of Jimi Hendrix and I wanted my 68’ partscaster to be the vintage instrument it really was and I no longer chased modern sounds… cause I already had the sound in the first place.

I did splurge one more time with my 50’ RW/ Blackie experiment… works good lasts a long time. I like to take it where I don’t want to bring a amp or a pedal. The Clapton circuit keeps the Road Worn in the ball game into any amp…. 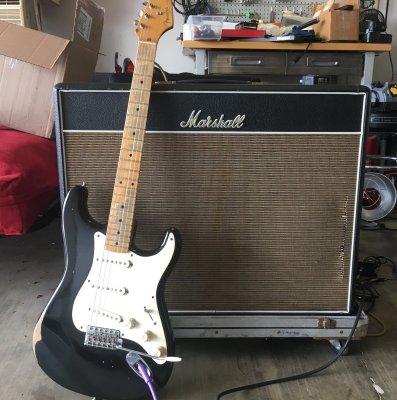 I was a sales rep at Gibson during the Norlin years. I remember the R&D guys and the head of marketing being all excited about the RD Artist with the active electronics (designed by Bob Moog).

It was my job to sell it to the dealers in my state. I couldn't give them away. Guitarists were NOT interested in a guitar with complicated electronics, that were capable of only mildly enhancing what a passive guitar could do.

That attitude among players really hasn't changed much. As a group, guitarists are very conservative about their equipment.

Personally, I'm not interested in having electronics in my guitar that do things that can be done by a pedal.

Do you like the current that’s running thru it via the amp?

ThebiggestJerk said:
Do you like the current that’s running thru it via the amp?
Click to expand...

In passive pickups, there is no current running through it from the amp. If there is, there is something wrong with your amp, and you better get it fixed before it kills you.

Siameser said:
I'm not interested in having electronics in my guitar that do things that can be done by a pedal.
Click to expand...

There ya go... and you can always unplug the pedal and put it on a shelf... out of the way..

vid1900 said:
Just about every bass player has active controls

But as far as guitar, the only active one commonly seen is the Crapton strat
Click to expand...

I get tired of supporting battery companies so I'd rather have a multi FX pedal with modeling.

with a proper buffer you dont need it. Any more than that and you're coloring the tone

It's funny that while many players fight against active pickups in their strats, they have no problem with buying an acoustic with onboard electronics. (70% are active)

....the acoustic being a much more traditional instrument, lol

vid1900 said:
It's funny that while many players fight against active pickups in their strats, they have no problem with buying an acoustic with onboard electronics. (70% are active)

....the acoustic being a much more traditional instrument, lol
Click to expand...